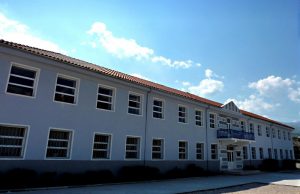 Tension between the Albanian government and the ethnic Greek minority is especially evident in the area of education in the Greek language. The following section documents the various aspects of this dispute. International human rights standards prohibit governments from denying minorities the right to enjoy their
culture, including their language. In this regard, the way in which the Albanian government addresses the particular concerns of the Greek minority can do much to reduce tension and foster an atmosphere of tolerance and good faith.
In 1991, the transitional government in Albania extended lessons in the Greek language, available in the first through fourth grades, to include grades five through eight for schools within the Aminority zone, the area in southern Albania where the Greek minority is concentrated.
Classes in Greek were also begun in
seven towns and villages outside of the zone, notably in Saranda, Delvina and, in 1992, Gjirokastër. Minority education was then enshrined in the Law on Fundamental Freedoms and Human Rights, approved by the Albanian parliament in April 1993. Article 26, on the rights of minorities, states that all individuals belonging to any minority may “teach and be taught in their mother tongue.” Shortly before the 1993 school year began, however, the Albanian government passed a new regulation that kept Greek-language classes in the minority zone, but required grades five through eight to combine both Greek and Albanian. The Greek-language classes that had been started in the seven towns and villages outside of the zone continued, but new first-grade classes were not opened. Most pupils and teachers were not informed ahead of time about the
changes. Some teachers refused to stop teaching in Greek and the police were ordered to enforce the revised curriculum. Some incidents of excessive force by the Albanian police were reported. For example, Kristaq Toli, head of the Union for Human Rights in Gjirokastër, told Human Rights Watch/Helsinki:
In 1993, two days before the school began, Government Decision No. 19 was issued by the Ministry of Education to close theseven classes and make changes in grades five through eight giving priority to Albanian. To enforce this, they used the police. Not only to block the activity, but they also used force against the pupils, parents and teachers. According to the Albanian Ministry of Education, Greek pupils in Gjirokastër were then offered free transportation to the village of Derviçan, seven kilometers away, where there was a Greek school, but most refused. Omonia then tried to open a Greek-language school of its own in Gjirokastër, which was deemed illegal by the Albanian government and closed. The Albanian Ministry of Education claimed that most parents voluntarily withdrew their children when they learned that their degrees would not be recognized. However, this is disputed by representatives of the Greek minority.
According to current regulations, a Greek-language class can be opened outside of the minority zone if there are at least thirty-two minority students plus a minority population that comprises at least 30 percent of the local population. Since Gjirokastër and Delvina fall below this minimum, their Greek-languageclasses have remained closed. The town of Saranda has an ethnic Greek population large enough to warrant a school, but one still does not exist. On August 22, 1994, another governmental regulation was passed that did not reestablish the arrangements of 1991, but did make an effort to address the concerns of the Greek minority. The new regulation offered two options to pupilsfrom minority populations living outside of the minority zone.
First, when there are enough students for one class (approximately twenty-five), they can be transported by bus, free of charge, to a minority-language school in a neighboring village; or, they can have two to three hours of instruction per week in their mother language in one of the larger regional towns. The new regulation also established a clear procedure for applying to open such schools outside of the minority zone. As of July 1995, Human Rights Watch/Helsinki was not aware of any applications that had been submitted. One on-going complaint of the Greek minority has been the absence of legislation allowing the founding of private schools. After three years of debate, parliament finally approved a Law on Private Education on June 21, 1995, that allows for private foreign-language or religious high schools. In both cases, partial instruction in the Albanian language is still mandatory; text books may come from private sources but must be approved by the Ministry of Education. One year advance notice is required to open such a school. There is some concern about the fate of children of mixed marriages. Those who are officially registered as ethnic Albanians do not count as members of a minority population and, therefore, are not eligible for schooling in a minority language, even if their parents desire this. According to the Albanian Ministry of Education, there are currently eighty school directors in the Gjirokastër district, thirty of whom are from the Greek minority. In 1993, the University in Gjirokastër opened a new department of Greek language which has twenty students, some of them ethnic Albanians. Gjirokastër also has a school to train teachers for Greek language schools. In 1995 there were four classes with 132 pupils.As discussed above, international law does not stipulate specific requirements to provide public education in a minority language. However,Albanian and international law does guarantee the right of a minority group to enjoy its culture, including its language.
The Albanian government should, therefore, beespecially sensitive to the Greek minority’s language and education concerns, bothto reduce tensions in the region and to allow the minority to enjoy its culture. Furthermore, the Albanian government should resolve these disputes through proper consultation with representatives of the Greek minority After almost five decades of state atheism, considerable progress has been made to ensure religious freedom in Albania. The transitional constitutional laws guarantee freedom of religion, and many foreign religious organizations, including Christian and Islamic fundamentalist groups, are active in the country. Religious schools have been established, mostly for Muslims, but also including a Catholic seminary and a seminary for the Autocephalous Albanian Orthodox Church.

Restrictions on Freedom of Assembly